Caught On A Wire 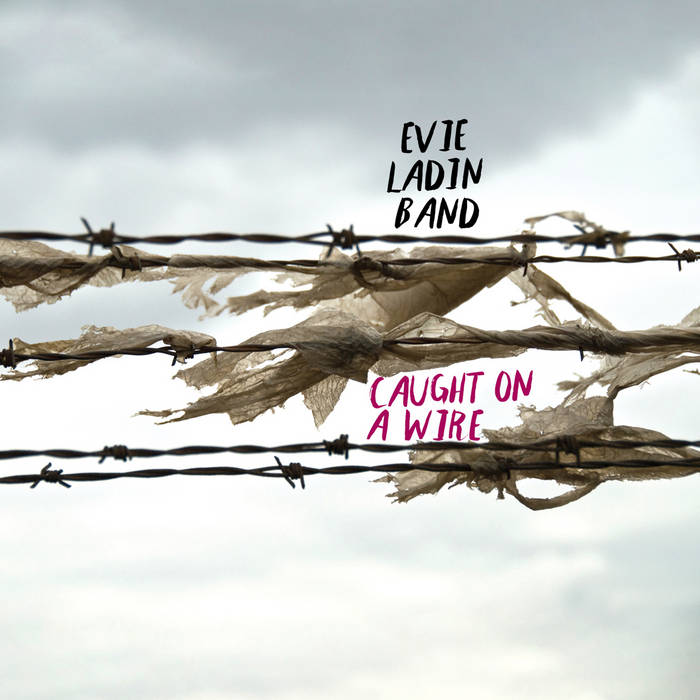 Steeped in the Appalachian arts, banjo phenom, dancer, and singer-songwriter Evie Ladin is pleased to announce her fourth full-length album, Caught On A Wire. Produced by the Evie Ladin Band, the polyrhythmic heat of Ladin’s clawhammer banjo, resonant voice, and real stories are on full display, in conversation with the inspired instrumentation of bandmates Keith Terry on bass and percussion, and guitarist Erik Pearson.

A full-time creative in every capacity, Ladin mines decades of touring and performing to illuminate a heartbreakingly honest take on the human experience through original songs on Caught On A Wire. With a rare combination of both breadth and depth, employing stylistic integrity in a myriad of genres, her Evie Ladin Band explores beauty and disappointment, the highs and the lows, and the paradox of feeling both simultaneously.

With this record, Ladin channels her love of tradition, creation, and performance along with frustrations, digging deep into the painful contradictions of the everyday. On the track “Almost Everywhere”, she calls out the homogeneous, corporate nature of American pop culture, even beyond the music scene. “New York to New Orleans / Every point in between / San Francisco, Baltimore / I’ve been almost everywhere /Everywhere ain’t worth it anymore / if it all comes from the same store.”

On the lullaby-esque “California, I Cry”, she sings about the incongruities of the state she now calls home, the difficulties and expense, held up against it’s beauty and creativity. “The song came to me while sitting in traffic on the Bay Bridge,” says Ladin. “There I was stuck in a jam of cars, and yet all around me is this amazing natural beauty.” The floaty electric guitar and vocals sing with nostalgia and California sunsets while the rhythmic acoustic strum brings a touch of Woody Guthrie to the otherwise indie sounding song.

On the more traditional, banjo based “Glory”, Ladin tackles personal insecurity. “sometimes I am and sometimes I ain’t / I ain’t baby most of the time / sometimes I can and sometimes I can’t / I can’t without you by my side / The sun is shining all around / it’s not shining on me” sings Ladin. “The song is about the way we can hold ourselves back from participating in the incredible things that are right in front of us,” she says.

From jazzy vaudeville numbers that inspire you to dance, to moody indie folk that make you feel and think, Ladin’s record is the product of not only a lifetime immersed the study of culture, but a depth of experiences, of joys and disappointments, living on two coasts, raising a career and a family, illuminating the various paradoxes living life in this world.

Raised between Baltimore and New York City, Ladin’s parents were deep into the folk revival. Her mother was an international folk dance teacher, and her dad loved old time music and had a constant open door for traveling bands. “I began playing banjo after John Cohen of the New Lost City Ramblers stayed at our house, and suggested to my dad that my sister and I should play” she laughs. Ladin took lessons from local banjo master Bob Carlin from the age of eight, and travelled with her father to festivals, parties, and camps around the country. It was at one such camp that the teenage Ladin was introduced to African music by then-ethnomusicology student Stefan Senders. “I remember hearing these rhythms, and a light bulb just went off. I became fascinated with the African roots of the American music and dance I had been participating in” says Ladin.

After graduating high school, Ladin went to Brown University where she dedicated herself to studying Africa in all disciplines, and other cultures where music and dance are an intrinsic part of social communication. She traveled to Nigeria as a student and was awarded a Fulbright scholarship to continue her studies there after graduation. But when she returned to the United States, she felt that racial dynamics were too complex to pursue a career in African studies as a white woman, that she would always be an outsider in that community, “and rightfully so.” She was offered a job with Rhythm In Shoes, a percussive dance company based out of Dayton, Ohio, and jumped at the opportunity to bring her skills to full time performance. Ladin spent most of her twenties touring with the company, showcasing traditional percussive dance forms with modern choreography, and developing her performance chops.

It was through Rhythm In Shoes that she met her partner Keith Terry, a percussionist who specializes in body music. Her relationship with Terry brought her to the west coast, where she quickly joined The Stairwell Sisters, an all female old time band, Crosspulse, an intercultural percussion ensemble, and began developing what would become ten years of producing the International Body Music Festival with Terry. With the Stairwell Sisters, Ladin really dug into her songwriting, and in the Body Music scene she applied her traditional music and dance knowledge to new compositions and international collaborations. “I spent my twenties as a professional dancer, my thirties growing into my musicianship and raising a family, and by the time I hit my forties, I really had something to say and was ready to launch my solo career down all of its avenues,” says Ladin.

With long time collaborators Keith Terry and Erik Pearson, she formed the Evie Ladin Band, and has released three previous albums (one of which won the IMA Best Americana Album Award). The band has won ribbons at Clifftop Neo-Trad Stringband Contest, and other festivals. But the launch of the Evie Ladin Band was not without its challenges. “Unfortunately, in our society, women over a certain age aren’t considered to have as much value as performers. I can viscerally remember the exact conference at which I became invisible. It made me so angry because I was thinking, this is where I belong, I’ve been doing this for my whole life, performing and teaching in and out of this tradition, working and creating in this community.” But Ladin refuses to be discouraged by the music industry’s idea of who gets to be a performer. “I already have a successful career in music and dance, and I know that adds value to my perspective, and the audience experience. I’m not sure why for women, having years of work under your belt seems to detract from your commercial appeal. But I don’t subscribe to that.”

THANKS to our families, community and fans

Bandcamp Daily  your guide to the world of Bandcamp